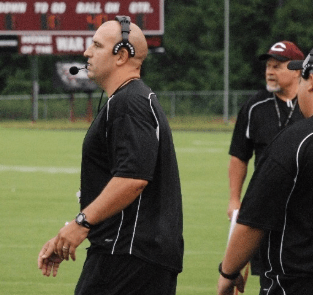 Luttrell’s first coaching job in Georgia was at Johnson in 2002. Blair Armstrong, also in his first season in 2002, hired him to lead his defense and build his athletes in the weight room.

“Stan was an outstanding hire,” Armstrong said. “We talked on the phone and made a connection right off. We are both committed Christians and he loves to help student-athletes become better men and women and, eventually, great dads and moms. We share the same values and coaching styles — tough but with love. I have been blessed to have had assistant coaches like Stan with the moral compass and love for kids. He will be a huge asset to JHS.”

Now, Luttrell’s coaching career has circled back to Johnson — this time as the head football coach.

“I have a lot of fond memories here,” Luttrell said. “I also see a lot of familiar faces. Johnson has a ton of tradition. When Coach Armstrong came in, I was part of his staff as the strength coach and defensive coordinator. I had a great two years here. It’s just a great opportunity to be a head coach again and be back in a known community in Hall County.”

Over the last two seasons, Luttrell was the associate head coach and defensive coordinator at Habersham Central. He helped lead the Raiders to the second round of the Class 6A playoffs in 2018. He’ll finish his duties at the school before he makes the move to Johnson. Luttrell said on Monday that he hopes to be with the Knights soon.

In the meantime, he has his work cut out for him. The Knights have been to the playoffs four times in the last 20 years – two during his first stint at Johnson. It’s a large task, but he understands the challenges that lie ahead.

“Right away is the time frame,” he said. “This is late in the year to be getting started. We’re just weeks away from spring practice. So all those relationships that are created and formed in the offseason are going to be in fast forward into spring practice and the summer. We’ve got to solidify the coaching staff, and I’ve actually got to get here and start implementing my system and my program.”

After a two-year run as head football coach at Union County, Luttrell accepted the same post at Chestatee High School in Hall County in 2006. He took over the War Eagles from Matt Fligg, who led the team to the playoffs in 2005 – his last season.

Luttrell went to work right away, guiding Chestatee back to the playoffs in his first season. During the next seven years at Chestatee, he built the program into a playoff contender, guiding the War Eagles to the playoffs three times, including a 17-6 record in his last two seasons and the school’s first-ever playoff win in 2013.

Luttrell left Chestatee in 2013 to take over the weight-training program at Buford. He also was an assistant football coach.

“No matter where I’ve gone, it takes time,” he said. “I believe in building football teams. Athletes are built and you don’t build them overnight. We live in a microwave generation and you can’t microwave athletics – you can’t microwave physical development. So, we’ve got to jump in as fast as we can and get to work. We’ve got to have time and attention. It’s just the way it works. I think everywhere I’ve been, we have developed players and there’s no reason it won’t continue here.”

The Knights play in Region 8-5A – home to perennial national power Buford, along with Clarke Central, Cedar Shoals, Loganville and Walnut Grove.

With that in mind, Luttrell says he’s not worried about the region competition right now.

Frank Zamora Top 10 State Finalist for Teacher of the Year